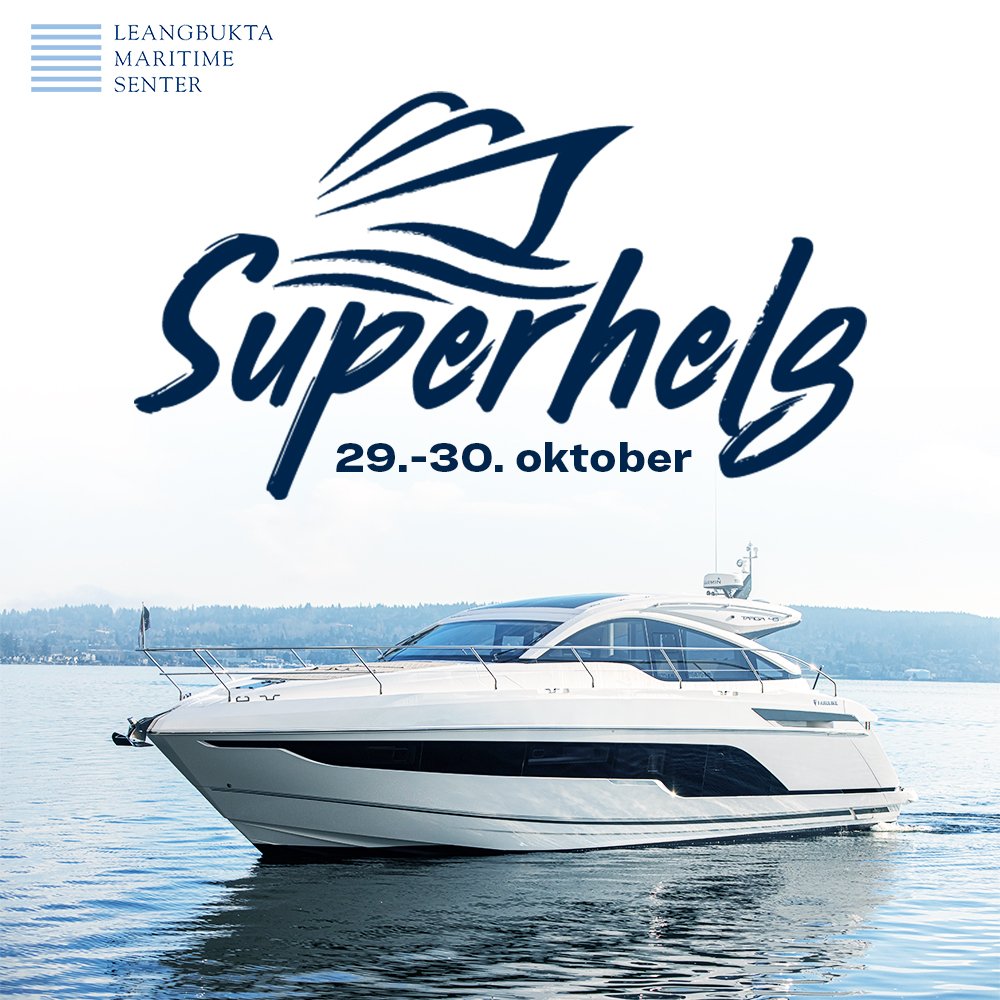 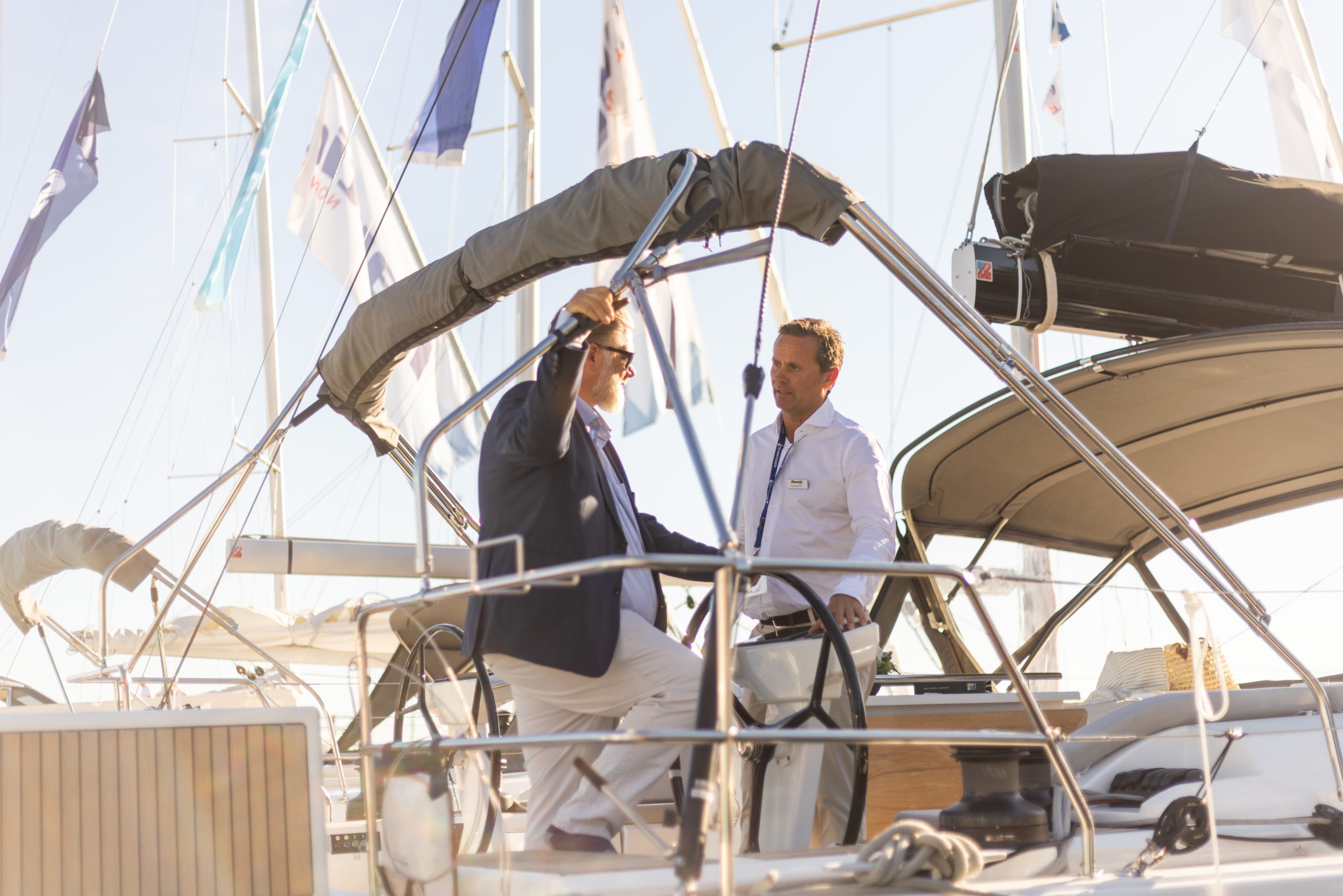 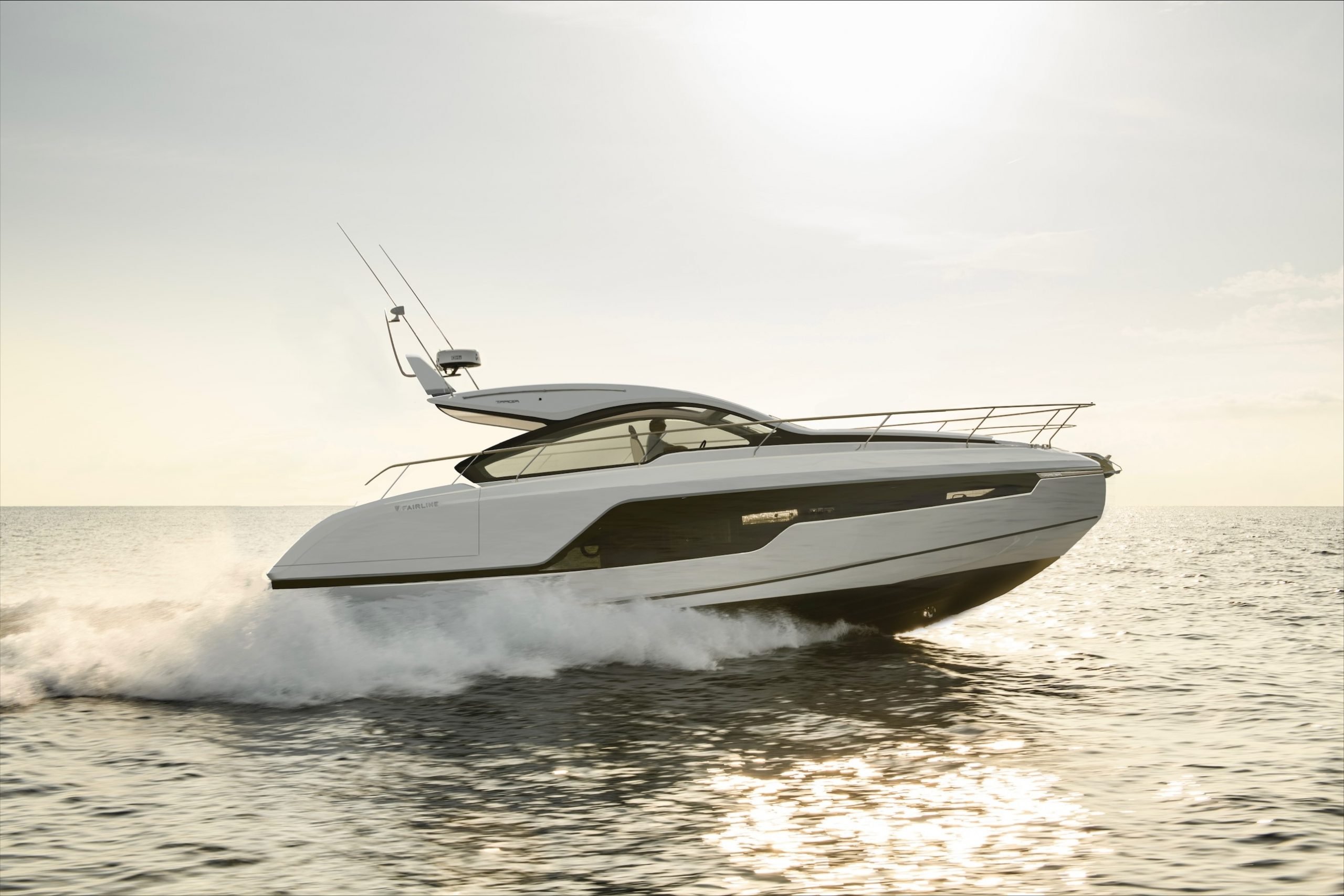 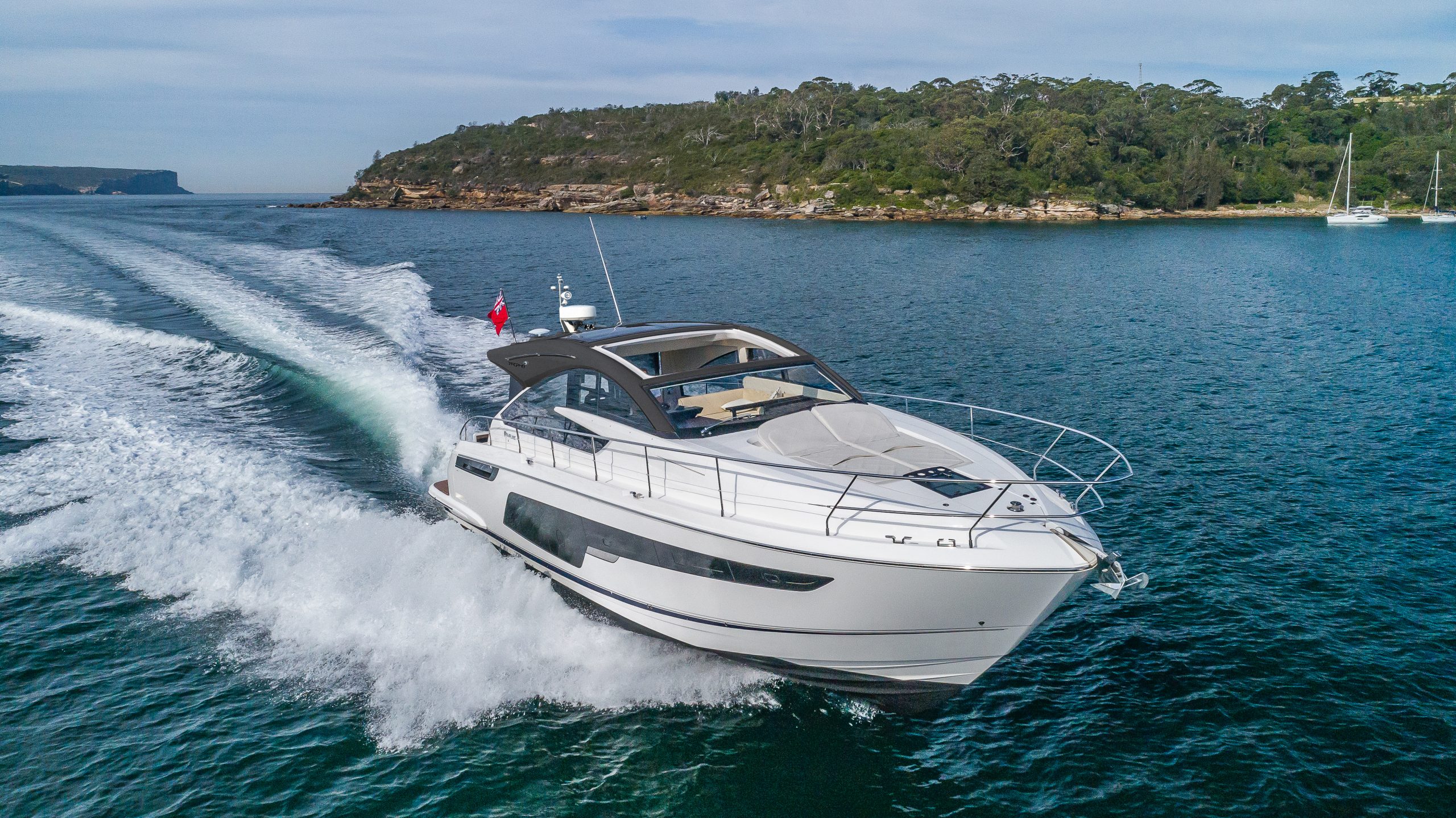 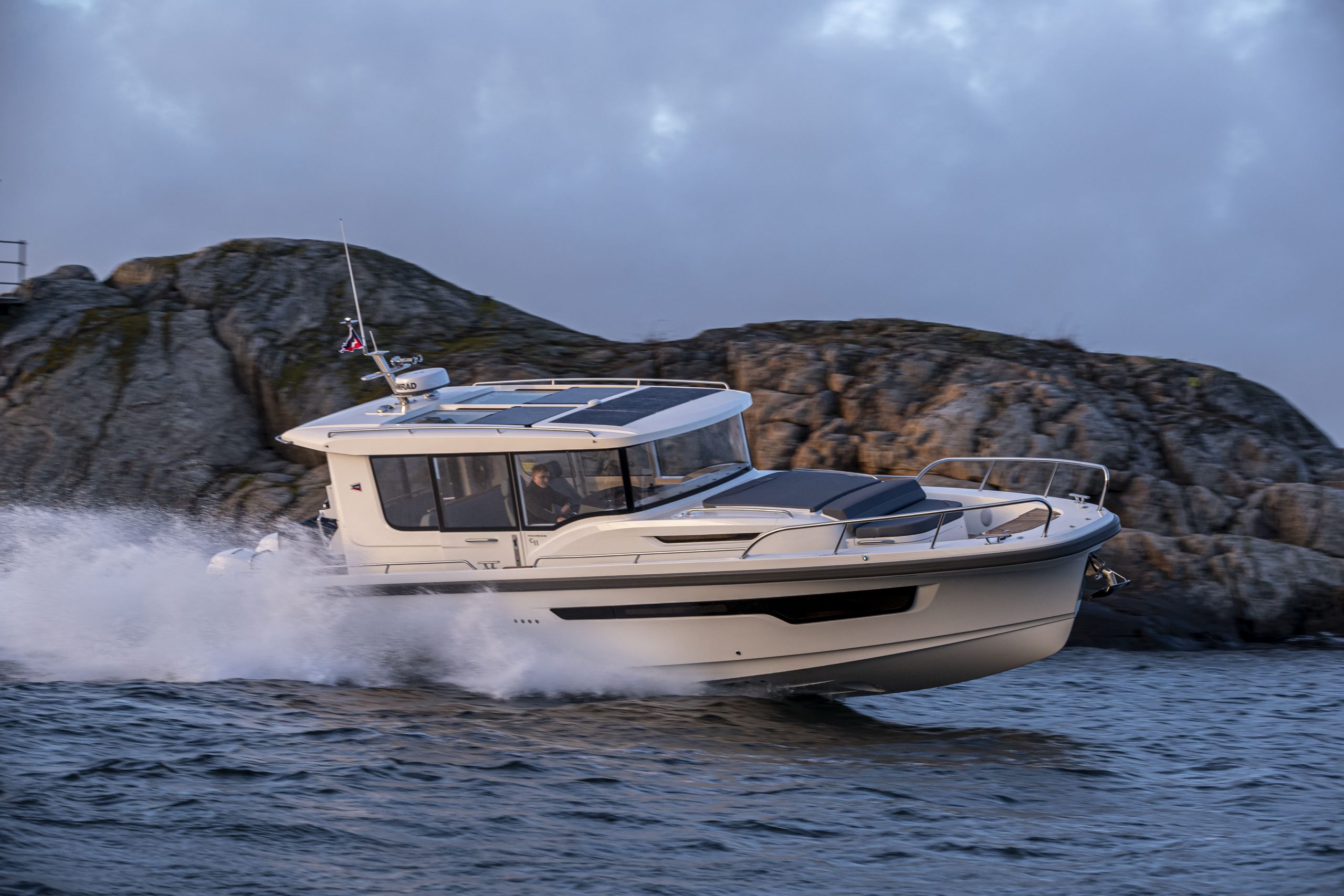 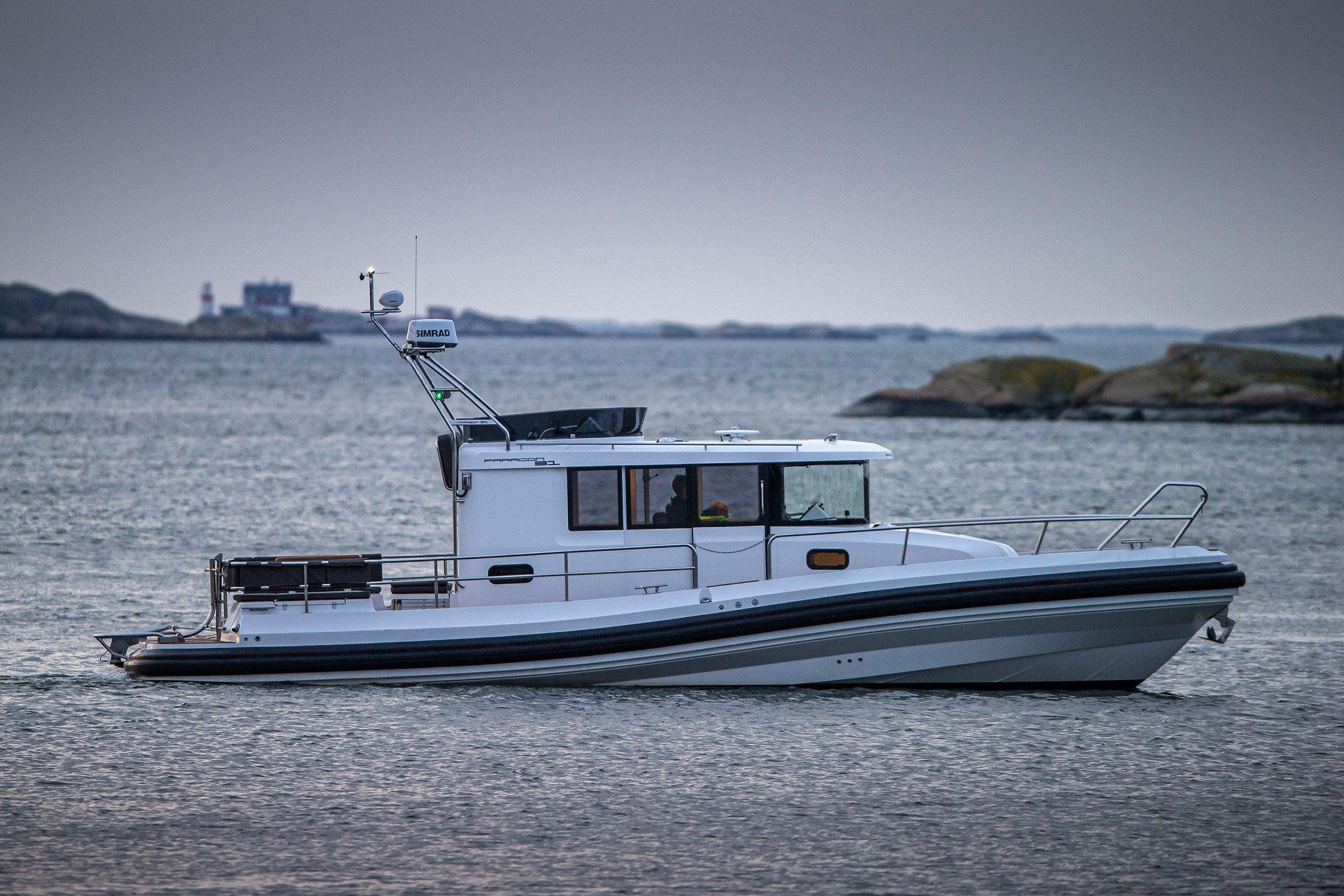 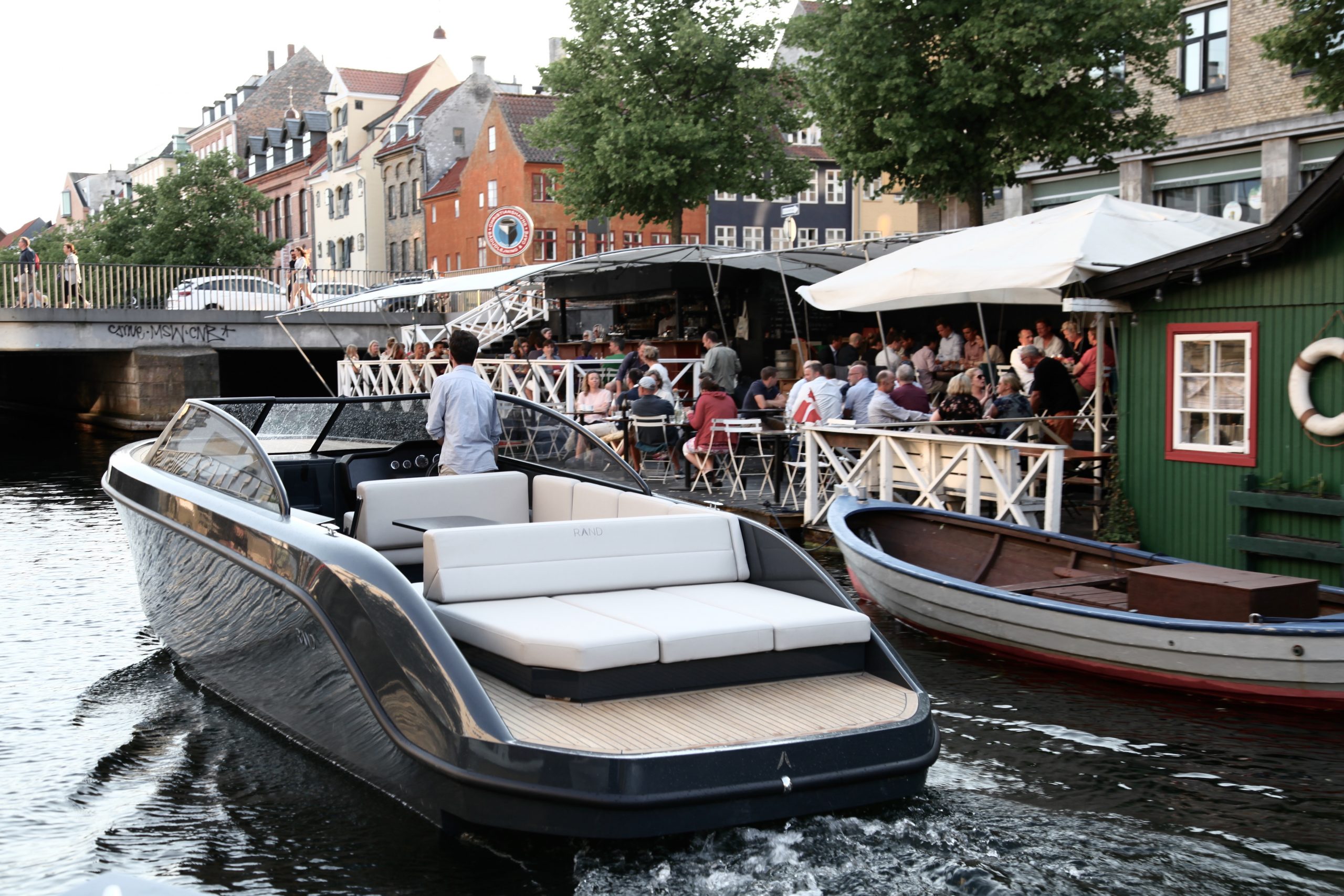 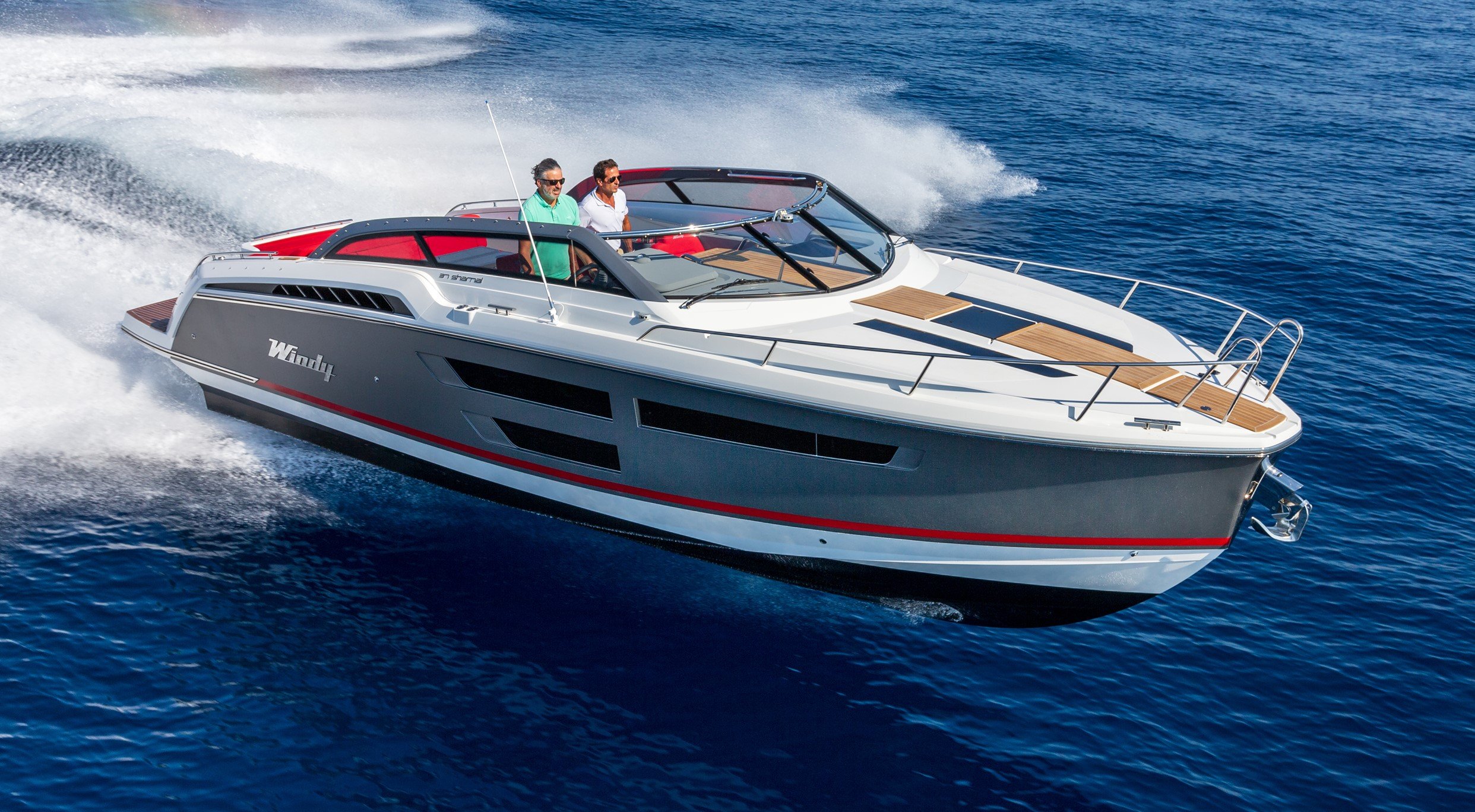 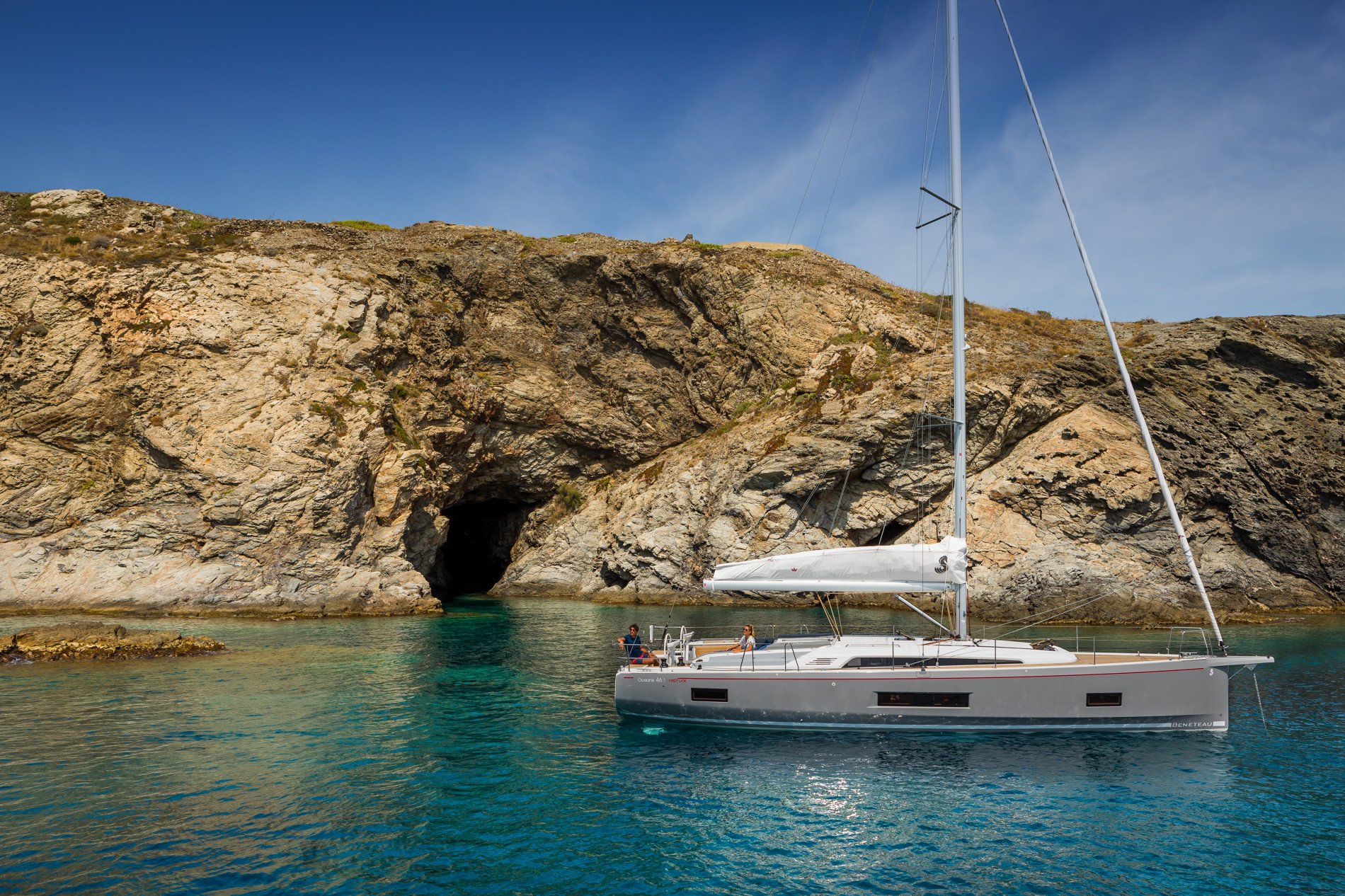 405 Flybridge
Excellent long-distance cruising properties
The 405 Flybridge is a Nimbus Coupé model built for knowledgeable boating people who enjoy social activities, comfortable living quarters, ease-of-handling and excellent long-distance cruising properties. We have put an extraordinary amount of work into layout and design in order to ensure an optimal flybridge. Not only to create a beautiful boat, but also to provide multifunctional social spaces with the right ambience. - Joacim Gustafsson, Chief designer at Nimbus

Total lengde (inkl. pulpit) 13.33 m
Tørr vekt 9655 kg
Utkast 1,1m
Vann kapasitet 400l
CE Klassifisering Kategori B
Transport høyde 4,35 m
Antall køyer 6
Drivstoff kapasitet 1000l
Kapasitet 12 personer
The flybridge has been constructed to harmonise fully with the design of the new coupé series. The roof has light, sweeping lines and incorporates the characteristic folding mast. A large, fixed skylight makes the saloon very light and airy despite the superstructure. The flybridge features several cleverly functional and social spaces. ‘We have put an extraordinary amount of work into layout and design in order to ensure an optimal flybridge. Not only to create a beautiful boat, but also to provide multifunctional social spaces with the right ambience,’ said Joacim Gustafsson, head designer at Nimbus. The flybridge includes a wet bar, with sink, grill and fridge, sun bed, large sofa and a twin helm seat. The twin seat can be turned through 180 degrees and thus form a roomy social seating group together with the sofa. If required the sofa can be easily converted into an additional sun bed. All functions on the flybridge have been designed to allow the boat to pass beneath bridges after a few simple adjustments. Thanks to the “sidewalk” deck layout, walking space is maximised on the starboard side, making it very easy to get on and off the boat and to spend time on deck, while allowing generous space in cockpit and cabin. The Nimbus Coupé series has been built since 1969 and more than four thousand of these boats have been sold worldwide. The 405 Flybridge is built in Mariestad at the Nimbus boatyard.
Modern Scandinavian design
Superstructure and saloon
“Sidewalk” is an asymmetrical deck layout where the side deck along the starboard side is extra wide and provides generous freedom of movement. It becomes convenient and enjoyable to move about on-board from bow to stern, and easy to get on and off the boat along the entire starboard side. Maximum use is made of the interior volume, allowing the cockpit, saloon, lower deck and cabin to be larger than would otherwise be the case in a boat of this size. An important feature of the Nimbus sidewalk concept is the large flush fitted sliding door to starboard. The sliding door provides quick access when laying alongside and enables manoeuvring the boat from a standing position on the side deck. The sidewalk concept also allows the use of the aft deck for various activities. And on the foredeck the extra space is used to integrate a large sun deck as a natural feature of the boat’s design. Polyurethane glued windows in the superstructure and a large wrap around windscreen provide a very contemporary look, exceptional stability and a quiet saloon. Visibility is exemplary owing to uncluttered surfaces (nothing gets in the way), matt finish anti-reflecting materials and integrated folding wipers. Large flush-fitted sliding door at the helm and large sliding glass roof with integrated sun blinds. Seating for four to five facing front. Divided into two seats at the helm and two-three seats at the reversible passenger sofa (the reversible passenger sofa was developed in the seventies for the Nimbus 26 and has been constantly developed and refined ever since). The saloon has an open Scandinavian layout with large flat surfaces and is light and airy, roomy and modern, but made cosy at the same time by special lighting, wood fittings and attractive seating and cushion covers. The beautifully finished joinery in the saloon and cockpit exude a wonderful feeling of hand craft and quality. The large U-sofa seats 6-8. The dining table folds down into a cocktail table with glass holders, making the saloon a handy place for socialising. The module designed galley (60CC) allows customised installations such as micro, electric hob, dishwasher, choice of ovens (electric or LPG). The galley is fitted with a fan that can be installed in the upper kitchen cupboard above the hob.
Sidewalk design